Categories Menu
Home » Backup » Windows backup – Don’t leave it until it is too late!

Windows backup – Don’t leave it until it is too late!

Using Windows backup software to make backup copies of all your important data is one of those tasks that most computer users never get around to. Figuring out how to use backup software just seems too boring. That is until something goes wrong and suddenly all those important documents you were working on can’t be accessed any more. All too often, people only learn about the need to backup their data after they have lost a large proportion of it due to a hardware failure.

It Will Happen to You!

Unfortunately, computer components, like all other machines, do eventually wear out. While components like the CPU (central processing unit) and the computers memory can last for many decades, hard drives are precision mechanical instruments and usually have life-spans of around five years, though this can vary considerably. Other types of media, such as USB stick drives or flash cards use a different type of storage but are still susceptible to wear and failure. Even the humble compact disc, once thought to be nearly indestructible under normal usage conditions, has shown to be less robust than we originally thought. Even if your disks never fail (and they will) what about you? Have you ever accidentally deleted something and then realised you needed it? Most people have, after all, that is why you can open the recycle bin in Windows and retrieve things you deleted! In short, there’s no escaping it, if you store valuable data on your computer then you are going to have to backup that data.

Your hard drive will fail eventually!

Here’s a statistic that you simply cannot dispute. 100% of hard drives that remain in use will fail eventually, it is simply a matter of time. If you don’t plan your backup strategy now, then it is almost certain you will lose some data or have to pay to have your data recovered. Professional data recovery laboratories can charge thousands just to inspect a faulty hard drive! 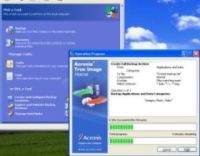 While using Windows backup software isn’t too complicated, understanding what to backup often is. This problem isn’t helped by the fact that Windows is a complex operating system that stores potentially important data in many different places. There are all kinds of Windows backup software available but before you rush out and buy a cutting edge backup solution, you should carefully consider your needs.

Consider the data on your computer, we can split it roughly into two categories:-

Programs – These are the things you install and run on your computer. They include word processors, web browsers, games, music players and anything and everything that runs on your computer.

Data – This is information that programs work with. It includes word processor documents, spreadsheets, music and video files, digital photographs, saved game positions and anything and everything that the programs you run on your computer work with.

Having decided what to backup, you need to decide which media to store your backup data to and how to go about backing it up. The next part of our guide will discuss the different types of storage media you can use when backing up data, click the link below to go to the next part of the guide.

Back to Home Page

Discuss this page in our forum.

This website uses cookies to improve your experience while you navigate through the website. Out of these, the cookies that are categorized as necessary are stored on your browser as they are essential for the working of basic functionalities of the website. We also use third-party cookies that help us analyze and understand how you use this website. These cookies will be stored in your browser only with your consent. You also have the option to opt-out of these cookies. But opting out of some of these cookies may affect your browsing experience.
Necessary Always Enabled

Any cookies that may not be particularly necessary for the website to function and is used specifically to collect user personal data via analytics, ads, other embedded contents are termed as non-necessary cookies. It is mandatory to procure user consent prior to running these cookies on your website.